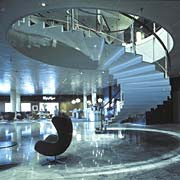 The Hotel With The Best Architectural Theme we are impressed with is the SAS Royal Hotel in Copenhagen, Denmark. Designed in 1956 by the famed architect and furniture designer Arne Jacobsen, this 20-storey cubist edifice was one of the first skyscrapers in that part of Europe, and stands today as an immaculately-preserved monument to his passion for perfection in proportion. The seemingly outdated exterior hides an exquisite gem of interior design, style and spartan elegance. Often called “The World’s First Designer Hotel”, this establishment has the master’s touch in everything from the architecture and interior design right down to taps, door-knobs, and even textiles. Two of Arne Jacobsen’s most famous icons, The Swan and The Egg chairs, were actually designed especially for this hotel, and many of his innovations here have been copied throughout the world in the past half-century. In the extensive renovations undertaken in 2000, great care was taken to preserve the master’s work, and room 606 was kept exactly as Arne Jacobsen left it, right down to the curtains and bathroom tiles.
Pix By Royal SAS Hotel
Posted by answerstravel at Saturday, November 16, 2013

Labels: Best Hotels Of The World