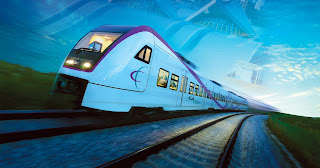 When it first began operations in April 2002, it raised mixed emotions with its odd-looking snub nose that belied its superfast speeds of up to 160 kmh.  Now on track to welcome its 100 millionth passenger, it has in the 17 years between, won regional and global accolades as the undisputed World’s Best Airport Rail Link.
This is the modest-looking Express Rail Link (ERL) that connects Malaysia’s capital city of Kuala Lumpur to its international airport in just 28 minutes.
For most of its existence, ERL used German train-sets from Siemens AG, but in recent years it has added several new train-sets from CRRC Changchun Railway Vehicles Company of China.
Regardless of the nature of the equipment, the ride on the fastest trains in Southeast Asia seems consistently swift, smooth and seamless. With an enviable claimed record of 99.7% on-time performance and excellent standards of customer-service, Express Rail Link is now being called in as consultants to other rail projects around the world.
We particularly like its complimentary porter service where purple-liveried porters assist you with your luggage, transfers and check-in. This helpful porter service also includes complimentary wheelchairs and assistance for aged or infirm travellers. For a small fee, a porter will accompany you for the entire ride, and usher you into or from an exclusive limousine that comes with the package.

Another feature we like about the iconic Express Rail Link is its commitment to the environment. Its operations have been certified ISO14001:2015 compliant for environmental management, and Express Rail Link says it helps save 44,800 tonnes of CO2 emissions each year, taking 5.3 million cars off the roads in that period.
Add the extra convenience of city check-in for participating airlines at its KL-CAT terminal, and we fully agree that Express Rail Link deserves its kudos as the World’s Best Airport Train!
Posted by answerstravel at Tuesday, July 10, 2018 No comments: