Airport Hotels differ from other types of hotels in several ways.  For example, most hotels have a fixed check-out time and a set schedule for housekeeping no matter if they are budget inns, luxury establishments, business hotels, vacation resorts, hunting lodges or any kind of pay-to-stay place at all. At airport hotels, however, check-out proceeds around the clock, as does housekeeping and room-service. Most other hotels rent out their rooms by the day, whereas Airport Hotels make their rooms available in a variety of time-slots, including ½ day and hourly.

In some ways, an Airport Hotel operates as a combination of hotel, hospital and 24-hr mall all rolled into one. In cases of unexpected security or AOG (aircraft on ground) situations, an Airport Hotel is transformed into an Emergency Accommodation Facility. At other times, an Airport Hotel may double-up as an in-house Convention Centre for busy corporate air-travellers meeting in a convenient location. For these and various other reasons, we tend to rate airport hotels in a category of their own. 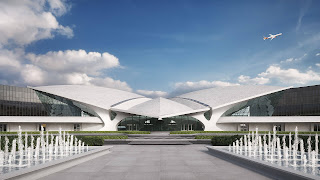 In North America, one Airport Hotel stands out for imagination, innovation, style and sheer iconic status. Located beside New York’s John F. Kennedy International Airport’s Terminal 5, the retro-chic TWA Hotel opened in May 2019 in what was once the historic TWA Flight Center that operated from 1962 to 2001.

The original TWA building was designed by world-renown architect Eero Saarinen for Trans World Airlines, an airline long-controlled by the legendary Howard Hughes. Conversion work began in 2016, and today there is a 512-room hotel complete with retro-themed restaurants and bars, infinity pool, ballroom, library-cum-bookshop, an enormous fitness-centre, meeting rooms and what is reputed to be the world’s largest hotel lobby at 200,000 square feet.

In keeping with the nostalgia theme, the bedrooms are equipped with Saarinen-designed chairs, a 60’s style martini bar, and even a working rotary-dial phone. Museum exhibitions of Aviation History run around the year, and parked at the back is a 1958 Lockheed Constellation aeroplane converted into a unique restaurant. Regardless of its retro appeal and attention to historical detail, this is fundamentally a functioning commercial enterprise, and given its convenient location and commitment to service, we have no hesitation in naming the TWA Hotel as the Best American Airport Hotel by far!

Pix by TWA Hotel, Michelle Young
Posted by answerstravel at Friday, May 24, 2019